The Climb to Camp 2- Eric Meyer and Chirring Dorje

After resting for a day in BC, Chhiring and I left for camp I, with a weather forecast suggesting favorable conditions for the next few days. We made the trek to ABC, where we stopped to brew up tea and organize our loads. Trying to think several days in advance, and predict what supplies are needed most at a camp or two above is sometimes challenging, but on this demanding mountain, it really pays to be as efficient with what you choose to carry up!

The climbing up to Camp I is pretty straightforward steep snow, which we found in good condtions, and so far rockfall hazard minimal to none. Some years this can be extremely problematic on the Abruzzi. Reaching Camp I, we were extremely grateful for the Mountain Hardware Trango 3.1 tent Fred and Chris K. had put up. We were able to spend the rest of the day hydrating and taking in awesome views of Broad Peak, Skyang Kangri, and Gasherbrum II from this airy perch. So much so that we rigged a section of climbing rope to be used to traverse the steep snowslope over to where we created a toilet site!

The next day, we shouldered packs that seemed too heavy and made our way up the 600 meters to Camp II. The weather started out nice, eg., calm, and the climbing enjoyable. There was mostly steep mixed climbing following fixed ropes along a rib of alternating snow and rock, with a few sections of ice 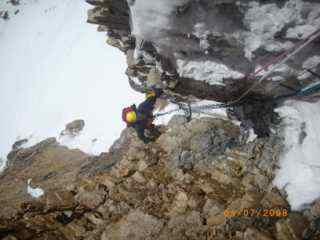