We had a bad stretch of weather from the 20th through the 24th. Everyday we woke up to a cloud of white. Snow falling, clouds hanging all around us and we were forced to wait it out as it dumped snow on the mountain. Finally on the 25th we made the decision to head up to camp 1. We got up there in a little bit of snow, but nothing that was daunting. The next morning we woke up to clear skies and headed up to Camp 2 for our night of acclimatization. The winds were picking up and were making the use of down suits necessary for some. Everyone was feeling great though and we were happy that we were one step closer to making our summit bid. Throughout the night of the 25th the winds continued to pick up and when we woke in the morning, the windspeeds were gusting up to 60 knots. We made the decision to head down rather then try to fight the wind and touch camp 3. As we descended the winds kept at us and we kept huddling up like penguins in the antarctic to be able to speak to each other.

We are now resting comfortably at ABC, enjoying great food, a few movies, and we watched our last episode of The Office. Dunder Mifflin seems so out of our reality we just laugh at Michael Scott. 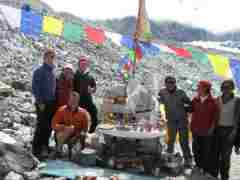 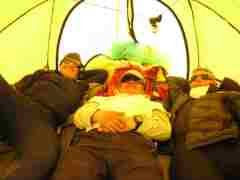 This is Amy, Chris's sister.   I spoke with Chris this morning and he sounded good!   He wanted me to post an update to say that the entire team has made it to Camp 1 and they plan to go up to Camp 2 in the morning to just touch it and then they will return back down.

hope everyone has a great weekend and I will let you know if I hear anything more!

To Camp 1 and beyond

We are moving ahead of schedule and everyone is feeling great, but a little tired tonight. Since the last installment from Matt we were able to do our Puja Cermony on Sunday Morning. Chhiring contacted the Lhama and he said Sunday was the most auspicious day. During our puja we had two strong signs that we will have a good climb. First we had two ravens land on our altar during the ceremony, and then we had changing weather. Sun, rain, snow, and wind all blessed during the ceremony. Our Kitchen help Carsung is a trained Lhama and he and Chhirning conducted the ceremony. ABC is all set up except for the shower tent, but that will be rectified tomorrow.

Today, instead of just going up to Depot Camp at 5850m we went all the way up to Camp 1 at 6250m. We left this morning at about 7:41 am and got back about 3:30 pm. Everyone did really well moving over the glacier moraine and up the scree slopes to get to Camp 1. I will try and send a few pictures to give you a better idea, but let me try and describe the climb. We leave from ABC and head up a rocky moraine (debris field left by a glacier receding) It has ice and rock stacked up in all sorts of strange configurations, like a two year old trying to build something. So we head out of camp and immediately start descending to the bottom of valley, climbing to the top of a valley, going down the next valley, etc... All the while stepping on rock and ice and slippery mud. It makes for a fun journey. Then we get to the valley that leads up to Camp 1 and start heading up about 800m of scree to top out on the ridge that is Camp 1.

We were foruntate that today was just a trial run without much weight in our packs. But Chhiring did hire two Tibetans who carried about 40 kg of gear up to C1. You do not hit the snow line until about 75m below camp 1 so we are able to wear our approach shoes to that point and that makes a huge difference.

Hello Friends,
This is Matt, with an update of our Cho Oyu expedition. We are in Advanced Base Camp, ABC. Our camp is set at 18,300 ft,situated where we can stare down the rest of the route. As I write, what started out as a little thunder has turned into a full on gropple event. Chris and some of the sherpas arrived yesterday, found this site, and set things up. Laurent, Chirring and I came in this morning. Having known Chirring only from summers he spent in Steamboat, it is awesome to see him in his arena. He is so strong, positive, and pretty much has rock star status. He literally knows everyone... And remembers all whom have crossed his path. He can do it all.. Case in point, last night he cooked fried chicken for us.. On a crappy little gas stove. It was the best I have ever had... Ever!! For Gods sake it is all I can do to make grilled cheese at home on thousands of dollars of kitchen equipment, and here he is... The Colonel Sanders of the Hymalya on a cook stove. He is concerned that we maintain our weight, thus we eat well.. Including some form of fried pototoe at each meal. Isn't there some kind of law against that?
It is so cool to have this technology up here... Thanks in whole to Chris. The other night we watched The Best Of Chris Farkey DVD!! We laughed long and hard at "you are going to end up eating a steady diet of Govt cheese, and living in a van down by the river" After hanging out in some of these Tibetan Tea Houses, that sounds kind of appealing! Lots if these tea houses have a tendency to be a little rough.
The Korean team is camped beside us... There are many teams and climbers, but these guys will be entertaining. They appear to be very well funded and organized.. They included in their supplies an Opera singer. Really! For no reason apparent to me he has burst into song today a few times! It was a little startling! His renditions last 2-3 minutes and he sings loud and with conviction! Who knows, I may become a fan.
So, here we sit at ABC.. We will hang for a few days letting our systems adjust. Meanwhile, a shout out to an amazing wife, kids and circle of friends!! Hey SSMS, hope sicence camp is going well... Thanks for the gold watch by the way, it is coming in handy. A sincere debt of gratitude to Eric Meyer for putting Chirring Dorge Sherpa in our lives!!

We arrived at Cho Oyu Base Camp yesterday morning. Everything is going great. Tents are up, food has been amazing, and everyone on the team is healthy and acclimatizing well.
This morning we went for a hike up to Palung which is the intermediate camp between the Chinese Basecamp and Advanced Base Camp, BC is at about 4855m and Palung is at about 5400m so it did our bodies some good to get the exercise after sitting in a car for the past 4 days.
Our trip to BC was relatively uneventful. We got stopped by one landslide on the Nepal side of the border and then missed the cutoff time to cross the border. Because of that we stayed in Kodari, Nepal instead of Zhangmu, Tibet. We spent two days in Nylam and I have to say how I am amazed at the new road that was put in on the Tibet side. What used to take 4 hours only took 45 minutes. While in Nylam we hiked up to about 5100m and enjoyed ourselves people watching. Then we moved to Tingri and I found it exactly as I remembered it, dogs outnumbering people 3 to 1, dusty and, a bit trying. We were all happy to depart Tingri and head to BC.
Our plan now is to spend a rest day at BC tomorrow and then head up to Palung on the 9th where we load our 4000lbs of food and gear onto yaks for the hike to ABC, and spend 1 night. We should arrive at ABC on the 10th of September and we will spend a day or two setting up camp and getting ready to start moving up the mountain.
Chris Klinke
Cho Oyu BC

Pictures of the Puja for Cho Oyu Trip 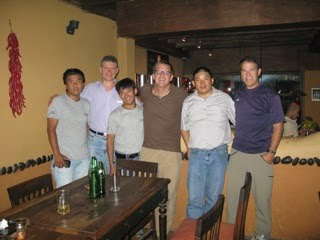 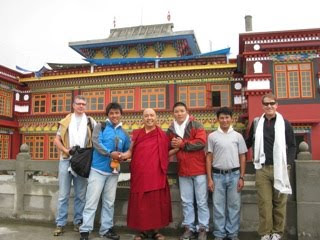 The Outside of the Monastery 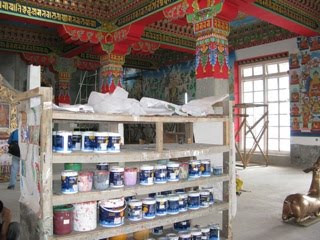 The Color Palette for the inside of the Monastery Temple 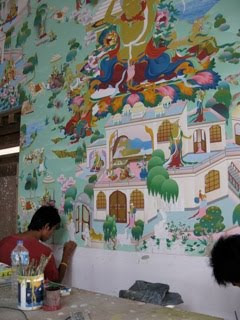 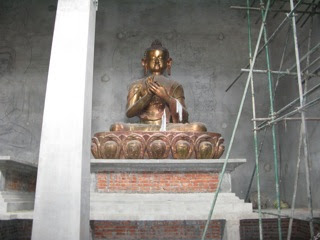 The Future Buddha stand over 12 feet. 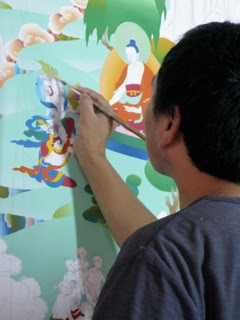 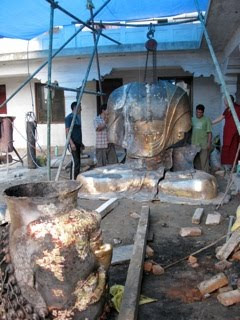 A Buddha Statue in the making, when finished it
will be over 12 feet Tall and be the present Buddha

Getting ready to leave Kathmandu

We attended a blessing from the Kyabje Trulshik Shatrul Ngawang Chokyi Lodro Rinpoche who is one of the most revered living masters of Tibetan Buddhism. He is the teacher of the Dalai Lama. They are in the process of building a new monastery outside of Kathmandu and it was really quite an amazing site to see the artwork, stonework, sculptors, and masons at work.

I will send some pictures later on this afternoon.
at 1:08 PM No comments: Links to this post