The team has all arrived and it has been a whirlwind of activity. Today we went for a blessing with the Lama Rinpoche, where we received the traditional Kata, a hearty blessing, and an amulet that provides for protection from rock fall, avalanches, and protects the wearer from bad things happening. It seems to work because a gust of wind came up during lunch and knocked an umbrella over, the way the umbrella fell almost took out Robbie because he had taken his off to jump in the pool. We were told that we would have an auspicious climb. After that we came back and finished our packing. I believe it was about the 8th time repacking for me. Then we headed out to the Ministry of Tourism for our briefing, we were introduced to our Liasion Officer and handed our permit in a little ceremony.

Now we have a few hours of downtime and then we head out for a group dinner with the entire team including the sherpas. Tomorrow we will fly out from Kathmandu to Tumlingtar, where we will jump in jeeps for an 1.5 hour drive and set up camp. The next day we will drive until the road becomes unpassable. As Chhiring said today, when the truck starts slipping going up we will start walking.

Attached is a team portrait of the American Team taken at dinner last night, and a picture of Eric Meyer with the Rinpoche.

This will be last update from civilization, I have tested the satellite phone connection and it appears to be working. The goal will be to send an update about every two days. 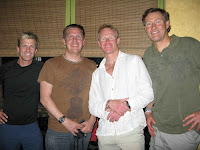 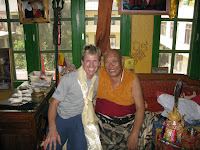 Chris Klinke, Kathmandu
at 3:35 PM 2 comments: Links to this post